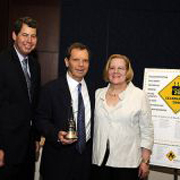 The award was presented to President Cullerton, among other key supporters in the U.S. Congress and the Administration, for his exemplary leadership on federal auto and highway safety legislation.

“Today, we celebrate the past twenty years of enacting highway and auto safety legislation that has saved many thousands of lives,” said Judith Lee Stone, Advocates president. “But, we could not have passed these lifesaving measures without the dedication and tenacity of our safety champions—they have made the nation’s roads safer for everyone who uses them, for generations to come.”

The 2010 Highway Safety Leader Award is an engraved pewter oil lamp that signifies “lighting the way”  to safer autos, driving and roadway environments in general.

A report released earlier today by Advocates showing that federal and state highway safety laws enacted over the past 20 years have saved over 85,000 lives and over $600 billion in costs.  The auto safety group used the report, Advocacy for Safe Cars, Safe Driving and Safe Roads: 20 Years of Saving Lives and Reducing Costs from Traffic Crashes, to call on Congress to enact additional safety measures to reduce fatalities and bring costs down even further.

In recent years, an average of 5.8 million crashes has occurred on our nation’s highways each year resulting in almost 40,000 fatalities and 2.3 million injuries, at a cost to society of an estimated $230 billion per year. Every day 102 people are killed on <?xml:namespace prefix = st1>America’s streets and highways, while more than 6,000 are injured, according to federal highway statistics.

Advocates for Highway and Auto Safety is an alliance of consumer, health and safety groups, and insurance companies and agents working together to make America’s roads safer.  Advocates encourages the adoption of federal and state laws, policies and programs that save lives and reduce injuries.  By joining its resources with others, Advocates helps build coalitions to increase participation of a wide array of groups in public policy initiatives which advance highway and auto safety.