Fighting against human trafficking unites lawmakers, law enforcement, businesses and civic groups. Unfortunately, a proposal that would help trafficking victims was caught up in the ugly political rhetoric surrounding immigration and was vetoed by the governor. This week, I will try to correct that mistake by trying to override that veto. This opinion piece sets the record straight on the proposal.

Under false pretenses it lures or outright kidnaps teenage girls from their countries and forces them into an immoral and inhumane underground trafficking network.

Across the country, businesses, law enforcement, civic groups and many others are working to raise awareness and push back. Key to this effort is empowering victims to come forward knowing they’ll be protected if they help us bring to justice the people behind these human trafficking rings that prey on underprivileged women and children, offering them an escape from poverty only to plunge them into a living nightmare.

In an effort to fight back and go after the real criminals, in 2000, the federal government began offering special immigration visas to victims of these types of crimes who cooperate with law enforcement. The goal is to encourage victims to come out of the shadows and work with police.

To help the cause, two years ago, Gov. Bruce Rauner enacted a law giving state assistance to these victims while their federal immigration paperwork is processed.

And that brings us to Senate Bill 34, known as the VOICES Act.

Here’s what it does. It sets a deadline for law enforcement to wrap up that paperwork and submit it to federal immigration officials for consideration. It’s needed because some local officials don’t do it, resulting in the victim never being considered for a federal visa. If authorities don’t think the person qualifies, they can say that in the report. All this proposed law does is set a 90-day deadline for finishing and submitting the reports.

Unfortunately, things took a turn for the worse as campaigns began.

Gov. Rauner, the governor giving these victims state assistance, in the heat of an election campaign, with immigration being a political buzzword, rejected the proposal, claiming it would slow down deportations. His comments had nothing to do with the legislation.

His actions and veto were a mistake.

I’m hoping the lawmakers dedicated to stamping out the black market sex trade will reject his veto. These girls and women need our help. This is a simple proposal that closes a loophole in a system we built together as Republicans and Democrats to push back against these immoral human traffickers and offer empowerment and protection to their victims.

Our democracy gives us a unique opportunity to set the record straight and do the right thing.

I intend to try to override the governor’s veto when we return to work at the Capitol. It is my hope my colleagues and the public at large is prepared to move past the rhetoric of hate and instead offer real solutions to real problems.

John J. Cullerton is president of the Illinois State Senate and lead sponsor of SB 34, the VOICES Act.

Senate President John Cullerton, a Loyola alum, made the following statement at a special ceremony on Friday:

“Today we honored Sister Jean for a lifetime of work to expand access to higher education and assist students on their path to higher learning.

“She was inducted into the Illinois Department on Aging’s Senior Illinoisan Hall of Fame.

“I had the honor of nominating her and then speaking at today’s event hosted by Loyola University.

“Congratulations Sister Jean Dolores Schmidt for all you do and all you have done.”

The woman known to the nation as Sister Jean has been at the Loyola Ramblers’ side for years and has served as team chaplain since 1996. 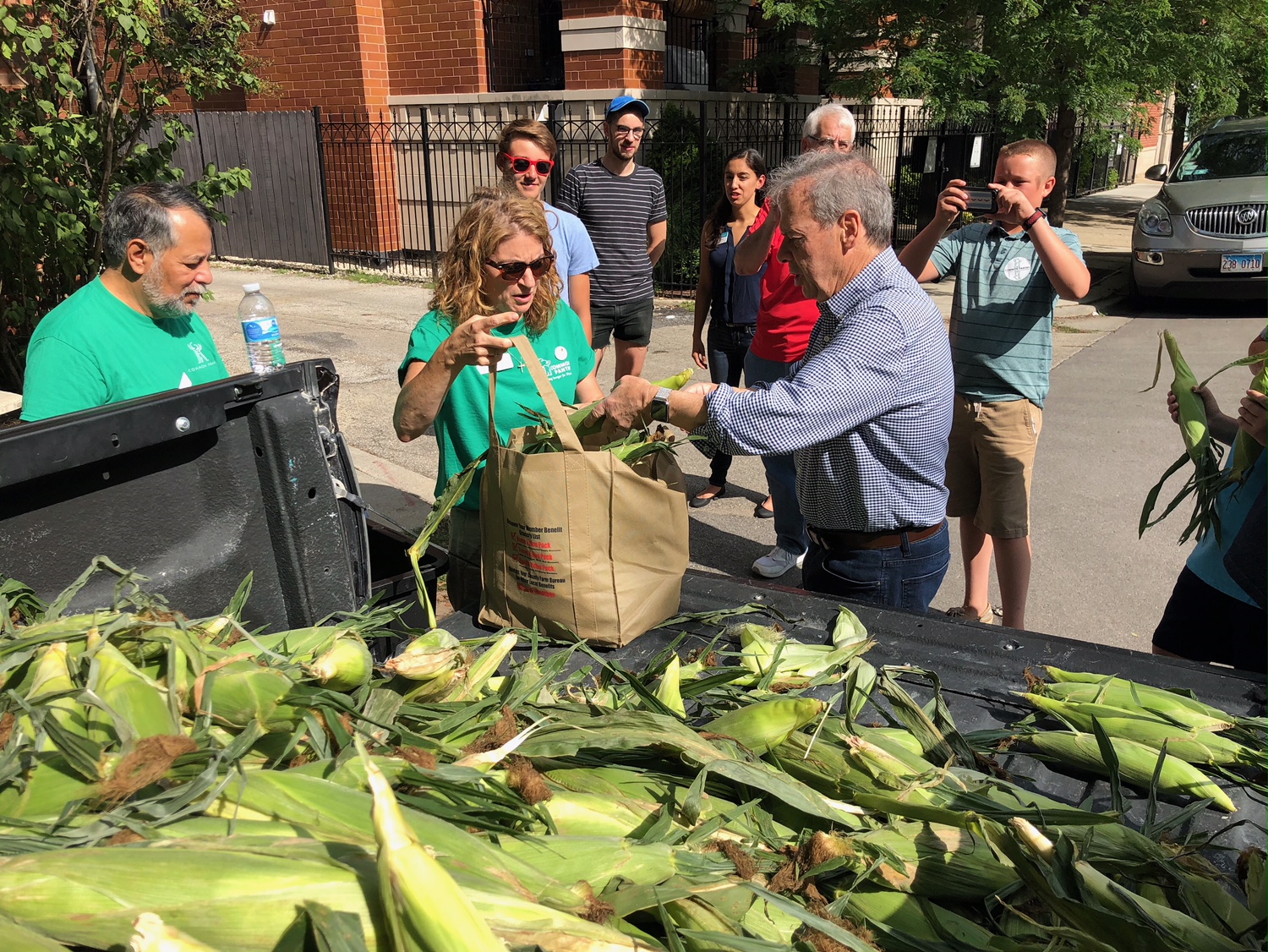 CHICAGO – Illinois Senate President John Cullerton thanked a group of downstate farmers for delivering a truckload of sweet corn Friday to Common Pantry on the city’s North Side to help area families.

“I appreciate their generosity. This is a tremendous opportunity for people from different parts of the state to work together, realize we’re all neighbors and remind ourselves of how great the people of Illinois can be,” Cullerton said.

Cullerton met the farmers at Common Pantry and helped unload the corn. Common Pantry will distribute the load to other area pantries.

Jeremy Thomas and his sons were among the downstate contingent making the delivery. Thomas farms near Pittsfield and is vice president for the Pike County Farm Bureau, which has built a relationship with Cullerton through a program that connects downstate farmers with Chicago lawmakers. 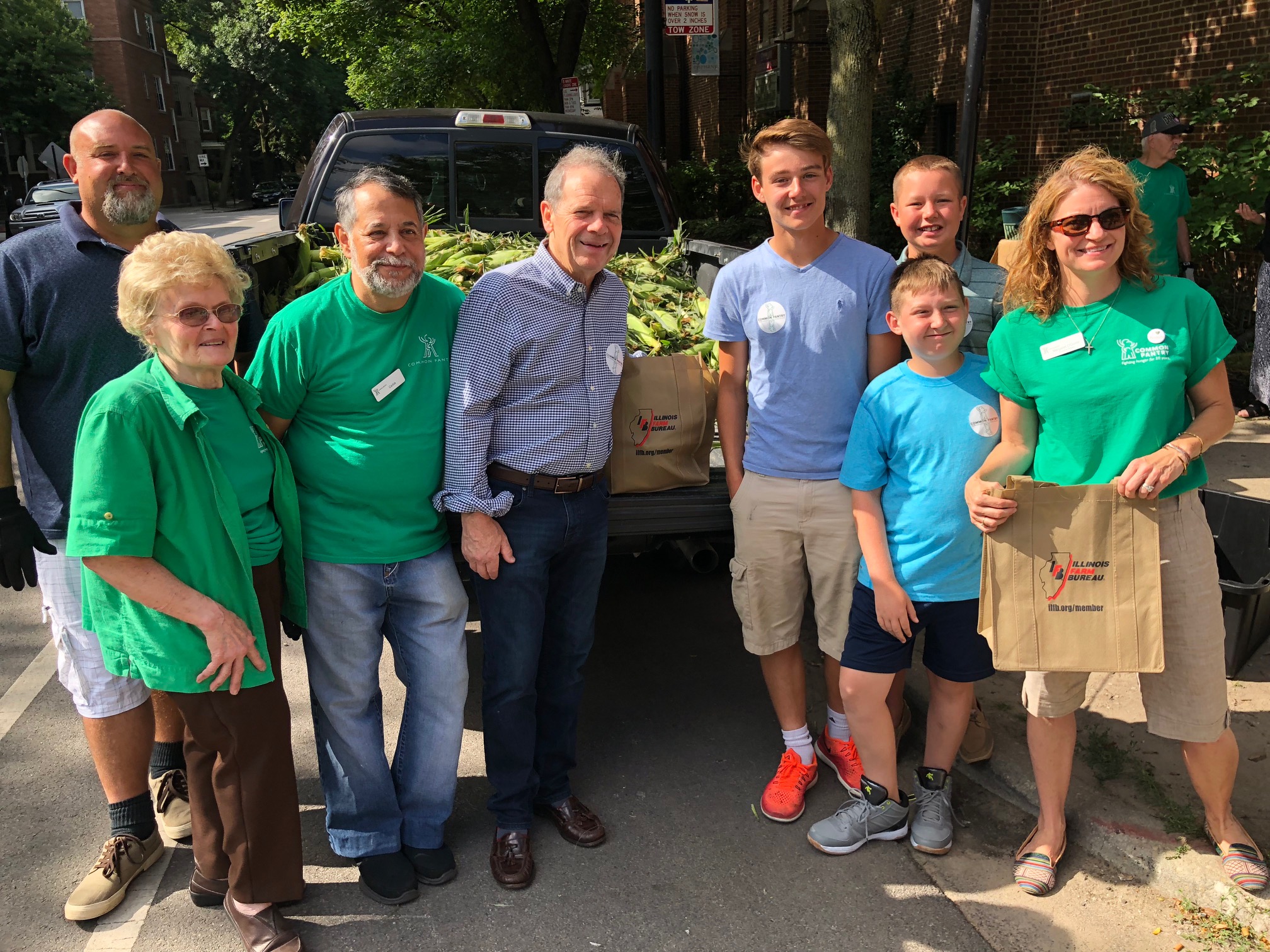 Thomas said Pike County farmers routinely donate to local pantries and similar relief efforts, but this is a chance to get a new perspective.

“It’s a wonderful experience. This is our second year. It’s one of those things that makes you feel good about helping other people … people all around the state need help. This is so much different from where we live. It’s just another perspective to see, that people are in need no matter whether you’re in a big city or in a small community,” Thomas said.

Common Pantry, located on North Damen Avenue in Chicago, has provided emergency food and social services since 1967 when it was founded to combat hunger and food insecurity in North Side neighborhoods. The organization provides weekly food distribution, home delivery to elderly clients, monthly produce distribution, a weekly hot lunch program and other services.

“Today’s visit and donation to Common Pantry was nothing short of amazing. The 1,000 pounds of corn donated by the Thomas family will go to folks from all over the North Side who struggle to find ways to feed their families. We were happy to welcome Jeremy, his two sons and nephew, as well as representatives from the Pike and Cook County Farm Bureaus and Senate President Cullerton. No doubt those who were here this morning left feeling our worlds are actually more similar than they are different. What prevailed was the universal sense of community and desire to help others,” said Common Pantry Executive Director Margaret O’Conor.

CHICAGO — In an effort to help feed Chicago-area families and bridge regional differences, downstate farmers will deliver a truckload of sweet corn Friday, July 27 to the North Side’s Common Pantry for distribution to other area food pantries.

The delivery is the result of an outreach program through the Illinois Farm Bureau that pairs Chicago lawmakers with downstate farmers. In this case, 6th District Senator and Illinois Senate President John Cullerton teamed up with the Pike County Farm Bureau, whose farmers made a similar delivery last year.

“To me, this is Illinois at its finest. We’ve got people who live hundreds of miles apart, coming together, helping each other and in doing so learning about all the different parts of our state and what’s great about them. I can’t thank the Pike County farmers enough for making the trek and helping out,” said Cullerton.

Common Pantry has provided emergency food and social services since 1967 when it was founded to combat hunger and food insecurity in North Side neighborhoods. The organization provides weekly food distribution, home delivery to elderly clients, monthly produce distribution, a weekly hot lunch program and other services.

“For the approximately 85 families visiting Common Pantry on a weekly basis, the relationships and donation streams through regional farmers like those from Pike County, as well as local community gardens, are extremely critical. Our mission is to provide healthy food and support to our neighbors in need. This donation is a perfect example of how those producing fresh food can help those who struggle to find ways to feed their families,” said Common Pantry’s Executive Director Margaret O’Conor.