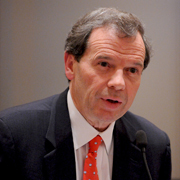 On Sunday, May 30, 2010, the Chicago Tribune Editorial Page again presented their criticisms and "solutions" to any number of challenges in Illinois.  In the past, the Tribune has refused to print unedited responses from Illinois Senate President John Cullerton.  As is past practice, President Cullerton has penned a response the Tribune editorial, “The Nov. 2 Election.”

In the Chicago Tribune’s May 30 editorial, the newspaper admonishes Illinois lawmakers for what they describe as a failure to deliver on jobs, ethics reform and the state budget. The piece is well-written. The argument falls flat.

In what has become a disturbing trend, the Tribune editorial writers again try to make their case based entirely on the strength of their prose, and not on the facts. In truth, Senate Democrats have been leading the way for more than a year now on economic recovery efforts, ethics, spending cuts, and budget reform measures.

The Tribune can continue to huff and puff. But they can’t rewrite history.

The Tribune loves to say that other states are working harder than Illinois to attract and retain jobs. If that’s the case, then how do the editorial writers wrap their heads around the fact that our state accounted for $31 billion of the combined $39 billion that states committed nationwide to economic stimulus efforts last year?

For the first time in a decade, the General Assembly last year passed a comprehensive, statewide capital construction plan. The Tribune can hem and haw about jobs, but it’s tough to take them seriously when that one action alone will put 400,000 people to work in Illinois.

Even more ludicrous is the fact that the Tribune’s own budget “solution” would have diverted the money for all of those construction jobs in order to make a very small dent in the state’s overall budget deficit. With our state’s economy on the line, it’s a good thing they write and we legislate.

In addition to the capital construction plan, Senate Democrats introduced literally dozens of legislative measures this year to create jobs and restore our economy. Many of those initiatives are now law, including a significant new tax break for small businesses that hire new employees, and modifications to an existing economic development tax credit that directly resulted in Ford Motor Company creating 1,200 new jobs by relocating a production facility from Kentucky to the south suburbs of Chicago.

The Tribune can say lawmakers aren’t working to create jobs. They just can’t prove it.

So what about ethics reforms? The Tribune says we ducked reform efforts last year. I say we passed the most sweeping, top-to-bottom overhaul of state ethics laws Illinois seen in decades.

For the first time in state history, we placed caps on campaign contributions made by individuals, businesses and special interests. We instituted stringent new requirements for campaign financial disclosures. We cracked down on insider deals by removing Rod Blagojevich’s political appointees from state pension boards, and passed a law to ban board members from receiving gifts from individuals trying to do business with the state.

We proactively worked to reduce the influence of money in the state contracting process by creating independent procurement professionals appointed by the state’s Executive Ethics Committee. We even strengthened the Illinois Freedom of Information Act to make it easier for individuals – yes, even Chicago Tribune reporters – to receive information on state activities.

The Tribune may deride our efforts. But even the non-partisan, not-for-profit Illinois Campaign for Political Reform – a frequent critic of lawmakers’ attempts to clean up state government – praised our actions.

So that leaves us with the state budget – or, as the Tribune characterizes it, our pattern of splurge, borrow and repeat.

In fact, we cut this year’s budget by more than $2 billion. We then reduced state operations by an additional 5 percent for next fiscal year, which begins in July. We made these cuts despite the fact that Illinois already has the lowest ratio of state employees to population in the nation.

In addition to – and maybe more important than – budget cuts, we passed comprehensive pension reform legislation this year that will reduce the state’s pension liability by more than $250 billion. As the Tribune rightly points out, we have the worst unfunded pension liability in the nation. But the editorial writers must have forgotten we actually did something about it this year.

We also took action in the Senate to address another Tribune talking point – passing legislation to require the state to finally address its backlog of unpaid health care bills. And finally, we passed a balanced budget solution – which was never called for a vote in the House – that would have raised the revenue necessary to keep up with increasing costs of quality education and government services, while providing much-needed property tax relief and tax breaks for working families and our lowest-income earners.

Sure, the Tribune can say we never acted on jobs, ethics and the budget. But our record speaks for itself.