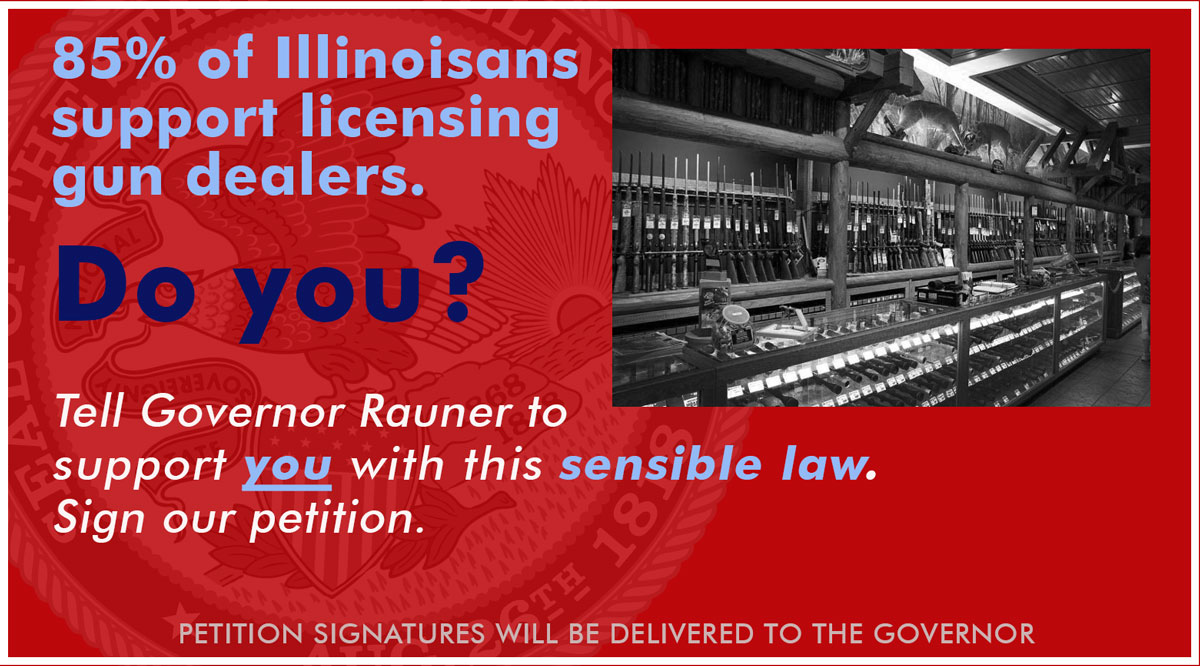 Millions of Americans have taken to the streets since the school shooting in Parkland, Florida, to demand change in our gun laws. We have the opportunity now to take action here and make a difference.

A state licensing system for weapons dealers would give Illinois the ability to address lingering problems without relying on Washington, D.C. and the federal government. More than a year has been spent on bipartisan negotiations to come up with a practical, comprehensive system. More than 85 percent of Illinoisans support licensing gun dealers. A proposal won support in the Illinois Senate and House.

Tell Gov. Bruce Bruce Rauner to work with lawmakers to enact a state licensing system for weapons dealers so Illinois can solve its own problems.

Petition signatures will be delivered to Gov. Rauner.

“I’m proud of the Illinois Senate’s continued leadership in pushing for safer communities. We all recognize the need for federal action on gun safety. But in the absence of federal action, I want to encourage our statehouse colleagues across the country to do what we did today, seize this opportunity to make a difference,” said Illinois Senate President John J. Cullerton, who represents the state’s 6th Senate District in Chicago.

“And I want to specifically call on Indiana officials to finally do something about the flood of guns from their state flowing into Chicago and being used for crimes. If Indiana were to take public safety as seriously as we do, both of our states would be far better.”

The Senate President’s call for statehouse leadership across America followed the Illinois Senate’s approval of legislation regarding gun dealer licenses (HB1273) and creation of a process through which guns can be removed from people who family members believe are prone to violence (HB772).

Cullerton also stressed that annual studies have shown that lax gun laws in Indiana result in firearms flooding into the Chicago and being used for crimes. Between 2013 and 2016, 21 percent of the guns recovered by Chicago police had been sold in Indiana.