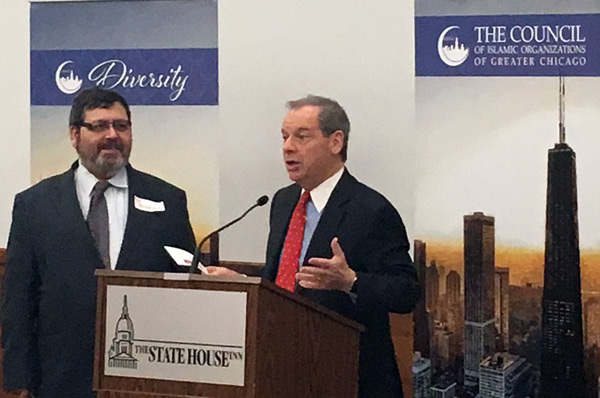 In presenting the award, council co-founder and Chairman Dr. Bassam Osman cited President Cullerton’s current efforts to pass the Illinois Trust Act. It would clarify that Illinois law enforcement will not participate in detaining people for federal authorities unless a warrant has been issued.

President Cullerton thanked the council for its help over the years in working on legislation and programs to encourage diversity. One of the first things Cullerton did upon becoming Senate President in 2009 was start a Senate page program so students participating in the annual Illinois Muslim Action Day at the Capitol could learn more about state government.

“I started this program with the help of your organization to set the foundation for future conversations, because by talking to each other we learn to appreciate our differences and discover our similarities,” Cullerton said.

“The history of Illinois is one of coming to terms with ethnic and religious differences. Our future relies on a similar commitment to protect and honor religious freedom,” Cullerton said. “As we know too well, threats still exist. There are still those who seek to distort public discourse in a desperate attempt to slow the sands of time from burying their ignorance and intolerance to the forgotten depths of history.

“But, whether they like it or not, change happens,” he said. “We are a people, a society, a government that ultimately exists to expand and accept.”